Emeritus status can become a barrier to great governance

According to the American Hospital Association’s (AHA)’s 2019 National Health Care Governance Survey Report, on average only 10% of hospital and system boards have emeritus members now. This finding begs the question, “Is granting an outgoing trustee ‘emeritus status’ a thing of the past?”

To answer this question, it is helpful to review the original rationale for creating a category of board membership called “emeritus.” The fundamental nature of not-for-profit boards is that their membership will change. Over time, some trustees will leave the board and others will be added. This is especially true if the board has term limits, which is the case for 78% of system boards, according to the AHA report.

There are multiple reasons why a trustee might discontinue board service: reaching an age limit or the end of their term; getting a more demanding job or retiring from the workforce; needing to deal with a changed family situation (e.g., new child or aging parent); or moving to another community or state.

Many former trustees have gained significant knowledge about the board and the organization itself and have been valuable contributors. Boards and executive teams do not want to lose their expertise, the institutional history or their support (philanthropic and otherwise). In some smaller communities, emeritus is offered because it is difficult to replace skilled trustees. Some would argue that emeritus status is a gentler “landing pad” for trustees who are leaving. All want to honor those who have loyally served in these important roles. So historically, boards have offered emeritus status to some outgoing trustees. 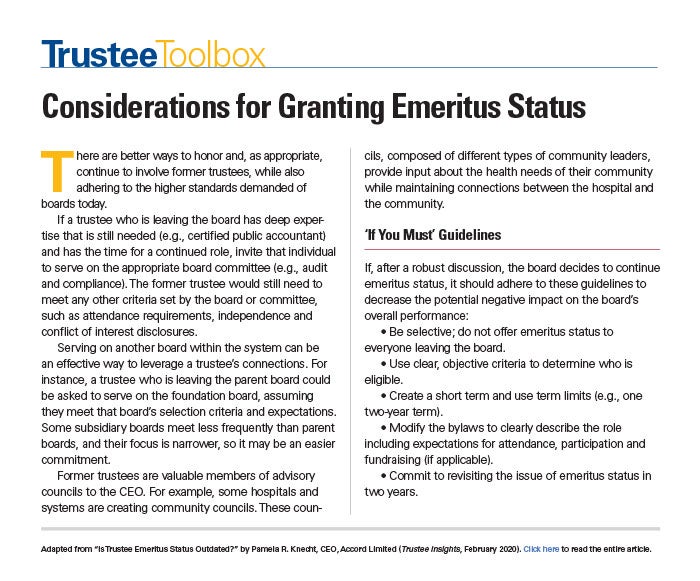 Not a Current Best Practice

Few boards offer emeritus status now because the governance bar has been raised. Regulators, legislators and the public are demanding more of the boards that are overseeing community assets. As a result, granting emeritus status is no longer considered a best practice because it can become a barrier to great governance. Here is a list of some governance best practices and how they are impeded by a robust use of emeritus members:

There are better ways than conferring emeritus status to honor and, as appropriate, continue to involve those who have served, while adhering to the higher standards demanded of boards today.

If a trustee who is leaving the board has deep expertise that is still needed (e.g., certified public accountant) and has the time for a continued role, invite that individual to serve on the appropriate board committee (e.g., audit and compliance). The former trustee still would need to meet any other criteria set by the board or committee, such as attendance requirements, independence and conflict of interest disclosures.

Serving on another board within the system can be an effective way to leverage a trustee’s connections. For instance, a trustee who is leaving the parent board could be asked to serve on the foundation board, assuming they meet that board’s selection criteria and expectations. Some subsidiary boards meet less frequently than parent boards, and their focus is narrower, so it may be an easier commitment.

Former trustees are valuable members of advisory councils to the CEO. For example, some hospitals and systems are creating community councils. These councils, composed of different types of community leaders, provide input about the health needs of their community while maintaining connections between the hospital and the community.

‘If You Must’ Guidelines

If, after a robust discussion, the board decides to continue emeritus status, it should adhere to these guidelines to decrease the potential negative impact on the board’s overall performance:

All trustees who leave the board should be celebrated for their service and commitment. This is especially true for board and committee chairs who likely invested many hours on behalf of the organization. Trustees appreciate receiving a parting gift, such as a plaque, along with public recognition of their accomplishments, such as an announcement at the organization’s annual fundraising gala.

Granting emeritus status may have been helpful to boards in the past, but it is an outdated approach for ensuring expertise and loyalty. Boards, like the organizations they oversee, are best served by adopting current best practices such as those described here and in many other resources available through AHA’s Trustee Services.

Is Trustee Emeritus Status Outdated?
Board Composition and Selection