You are on a busy but fast-moving highway heading out of town for the Fourth of July holiday when the brake lights of the car in front of you illuminate. Can you tell just from the brake lights whether the driver in front of you is slowing down or is stomping the brake in a panic stop? No. All the brake lights tell you is that the driver has engaged the brake to some degree. You must look quickly for other clues to estimate that degree and immediately decide what to do. The brake light only gives you one piece of limited, binary information: it is either on or off. You must make a quick decision based on this information and certain clues and assumptions. The wrong decision can have disastrous consequences.

Different drivers approach this scenario in different ways. Some always make the same assumptions (the driver in front is just slowing down a bit), while others adjust their assumptions and reading of clues to the conditions and changing risk profiles. The drivers who adjust, who use a variety of clues — and who use different processes to make these frequent, seemingly identical but actually very different and critical decisions — are the ones most likely to avoid accidents. They use different processes to arrive at different decisions in common situations with different variables, and they make better decisions by doing so.

Many boards are similar to the driver who always makes the same assumptions about the brake lights out in front: they use the same process and techniques to make decisions in similar situations with importantly different circumstances and risk profiles.

The first thing that any effective decision-making body, like a board, does is explicitly decide how it will make decisions. Further, effective boards develop different, clearly defined processes to make decisions of different magnitudes. Yet, many boards have never had an explicit conversation about or developed multiple approaches to this most critical of governance functions — their decision making. As a result, the vast majority of boards have a very limited tool kit of processes and techniques for making effective decisions.

There are two very common foundational problems with board decision making: a culture of unanimity and having only one decision-making process. In a culture of unanimity, there is a strong expectation that every board member will vote in support of the motion before the board or against it if that is the board’s signal. A review of the meeting minutes of a variety of boards will demonstrate this: the overwhelming majority of board votes are unanimous. Many board members cannot remember ever having a non-unanimous vote.

In some boards the expectation of unanimity is so strong that even in the rare instance of one or two dissenting votes cast, the board chair says something akin to “the majority has clearly spoken, so let’s make it unanimous.” Why? What is wrong with dissenting votes? Why must every board member agree?

In his book The Effective Executive, Peter Drucker provided a clear answer to the weakness of consensus and unanimity: “To make more effective decisions, develop disagreement rather than consensus. Disagreement provides alternatives and makes you think more deeply about the issue. In fact, if you don’t have disagreement, you’re not ready to make a decision.”

The second foundational problem with board decision making both flows from and supports the culture of unanimity: having one dominant, if not exclusive, approach to making decisions. This common decision-making process involves two characteristics: (1) binary decisions and (2) simple majority rule. Like the brake lights on a car, the vast majority of decisions boards make are binary: they vote yes or no, approving or rejecting the motion before them. As a result, and consistent with a culture of unanimity, it is impossible for most boards to be able to discern the honest degree of commitment to the issue being voted on by the board members from the vote alone, just like it is impossible to discern how aggressively a driver is hitting the brakes from the brake lights alone.

Many CEOs and boards misinterpret a unanimous vote for shared, deep commitment to the issue by all board members when in fact it often reflects tepid support at best due to the culture of unanimity, a rushed decision, or some other governance decision dysfunction. This miscalculation can cause boards to second guess, undercut or prematurely reverse formal decisions that they previously have made, with many possible negative consequences, including precipitating the termination of the CEO. This “unanimously approve now, challenge and dissent later” dynamic is an unfortunate but common form of governance dysfunction and one directly related to the limited and limiting binary decision-making process.

Many boards default to the binary decision process for all of their decisions, with many using the same process to approve the minutes of their last meeting as they do to approve a major merger or strategic initiative. The binary decision process indeed has its place in effective board decision making, but it should be one of a number of processes, tools and techniques for effective board decision making.

Effective boards avoid binary decision making as their only decision-making process. They identify those issues that are so critical and consequential that they expect and insist on being engaged in the early phases of the decision-making process, in the multiplication of alternatives, and in the challenging of assumptions. This process involves the board’s actually framing and refining the ultimate binary question (do we do this or not?) and deeply understanding the implications and risks, rather than just being presented with a pre-baked decision. When a board makes a bad decision, one of the biggest reasons it does so is it makes its choices more limited than they have to be. 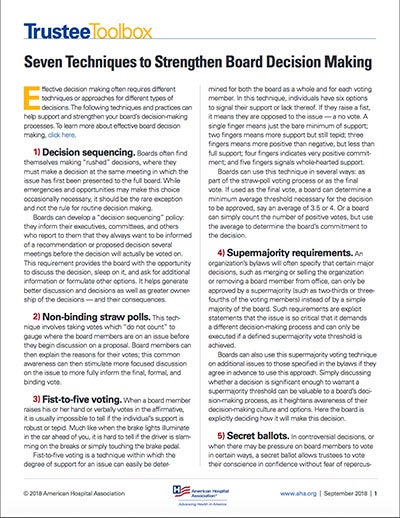 A look at techniques and practices that can help support and strengthen your board’s decision-making processes.

Many trustees are surprised to discover that there are many approaches and techniques for more effective board decision making. Some of these include:

Jamie Orlikoff (j.orlikoff@att.net) is president, Orlikoff & Associates, Inc., and national adviser on governance and leadership to the American Hospital Association and Health Forum.